While attempting to detangle my hair after getting out of the shower one morning over Christmas break, I thought, “My hair’s grown really long. Really, really long. I think it’s time for another donation.”

I began browsing magazines and websites, looking for photos of people with short hair. I found a few pictures that I described as “darling pixie cuts” and printed out the images. On my salon’s website, I booked the first available appointment, Tuesday, January 6. And then I waited.

I told a few people what I was planning to do, and was met with responses ranging from, “Have you ever had short hair before?” to “But your hair is so pretty” to “That’ll look adorable!”

I arrived to the salon a few minutes early. When I told Jaimie what I wanted to do, she squealed. I think hairdressers like doing dramatic things.

She carefully sectioned off one, then two, thick pigtails. She cut through the first one and gauged my reaction. “Oh my god!” Now it was my turn to squeal, delighted. I shook my head, amazed at how light it felt with just one pigtail gone. She positioned the scissors next to the second pigtail. “Wait! Let’s get a picture of this!” And then the second pigtail was in her hands.

I loved the slashes of the unexpected asymmetrical bob. “This is great! Can we leave it like this?” She laughed and said no. After a wash and an hour more of cuts and snips and blow drying and more snips and some shaving, I looked into the mirror and barely recognized myself. The smile was the same, as well as the laugh, but no more long locks. I thought I’d mourn the loss of long hair, but instead I felt light. And sassy. I carefully packaged up the 14” of ponytails to send to Children With Hair Loss, an organization that provides hair replacements at no cost to children who lose their hair because of cancer, Alopecia, burns, Trichotillomania and other rare diseases and disorders. And felt great about the first donation of the year. 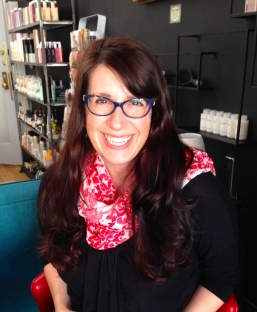 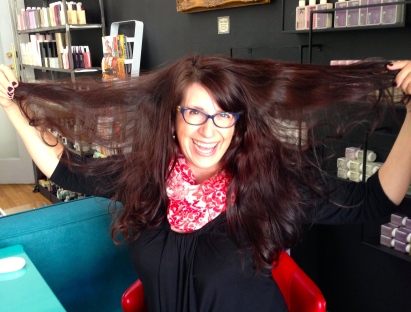 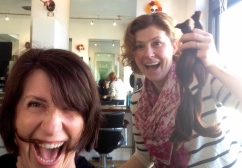 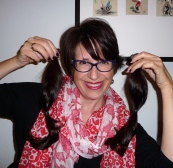