When I was about eight years old, my parents decided that we would build a cabin in the mountains a couple of hours from our home. Our pastor had a cabin there, and we enjoyed weekends spent visiting – tubing down the New River, watermelon seed spitting contests, dark nights full of sparkling stars. I’m not sure what order things happened next, but they bought a piece of land on the mountain, bought a dilapidated log cabin with foot high weeds all around it in another town from a fellow church member, and bought a ’54 Chevy at a yard sale for $300. At least that’s what I remembered. Dad’s corrections are in italics in parenthesis below.

It was true, they did buy a plot on the mountain.

And they did buy a dilapidated (it was merely abandoned, not dilapidated) house from a fellow church member who had inherited it. (The church member’s grandfather was born in the cabin. We looked for the cemetery where he was buried and his tombstone said he was born in 1878, so we know the cabin was at least that old). Dad said the house could have been lived in, had someone put some work into it. The work we put into it was tearing it apart. Every weekend we would drive to a place in the middle of nowhere (near Pilot Mountain, NC, about a half hour from our house) and tear apart the house, salvaging as much material as possible – the 1” thick (1” thick, 13” wide, heart pine) pine hardwood floors, the hand-hewn logs (hidden beneath clapboard siding), and so much scrap lumber. Maybe the end image is the one that sticks in my mind – a field of weeds (that part was true) with simply the shell of what used to be a house, a few bricks here and there, some corrugated metal roofing laying to the side. One day as they were working, and I was playing, they noticed a blacksnake slithering out from between the clapboard and the logs. And then the snake was noticeably thicker. It was *two* blacksnakes, wrapped around each other, slithering out of the house. And out. And out. And out. They were each at least 8 feet long (6 – 7 feet, actually). We dubbed them Sally and Sammy, and kept an eye out for them each time we were there.

And then there was Pinnacle, the truck, named for the town where we bought her at a yard sale (bought from someone’s yard; it was parked in their yard with a “For Sale” sign on it, asking price $250, not $300) and the price was right. Pinnacle was a ’54 Chevy bright red pick up truck, with a can of said red paint in the truck bed. When we got her home, Dad said that he’d pay me to paint the truck. I remember it being an exorbitant sum of money, possibly $20 (actually, only $10). Remember, I was eight years old. So I got a 4” wide paintbrush, put some newspaper down in the garage, and painted Pinnacle. I thought she looked stunning. Being artistic, I even painted the raised “C H E V R O L E T” on the back tailgate a pristine white. Well, pristine except for that little bit that bled into the fresh red paint.

We had so many adventures in Pinnacle. Imagine what kind of truck you might buy for $300 ($250). Pinnacle had a huge bench seat, wide enough for dad to drive and my sister and I to sit in the front together, without even being close to touching. The windshield wipers only worked one way. So if it rained, we’d turn the wipers on, and they would swish to the left. Dad would then, as he was driving, reach out the triangle that should have housed a window (but was missing), lean forward, and slap the wipers the other way. They’d then swish to the left, and the process would repeat. Being young ladies influenced by peer pressure, we were mortified that our friends might see us riding in this pickup. So my sister and I would crouch on the floor of the cab, plenty of room there, until we had made it out of the neighborhood. Pinnacle had no seatbelts. Which would have come in handy the day that we rounded a curve and the passenger door flew open, my sister and I slowly sliding, on our way towards careening towards the asphalt. Dad pulled us close and slowed down. The door latch was busted. Nothing a sturdy rope couldn’t fix. He rolled down the window, tied the door shut, and from then on we had to enter through the driver’s side door. Until a neighbor borrowed Pinnacle and fixed the door handle by installing a hook and eye lock on the outside of the door. Even though this was the 1970s, I’m sure that wasn’t legit.

So each weekend, we’d go to dissemble the house, my sister and I usually playing in the fields while the adults pulled logs apart and numbered them. This went on for a couple of years and then it was time to reassemble them on the mountain. Dad hired a huge flatbed truck to load the logs, and up we went. The foundation had been laid with the help of a local contractor who had built many other beautiful log cabins, and we got to work. I’m not sure how much help my sister and I were. I remember them sitting us on the porch that was being built, and instructing us to hammer nails into the wood, which I remember as locust, which resulted in a lot of bent nails. But it kept us occupied. Sort of. (The other thing we did was give you and your sister brushes and asked you to “wash” the logs as they were waiting to be assembled.)

Dad installed a swing on a tree to the side of the cabin. We would sit in the swing towards the top of the mountain, and then as we swung out, we were so high above the ground, Empire State Building high (maybe 10 feet high). The mountain at that point was fairly steep, and we loved swinging out into what felt like thin air, singing the Carpenters popular hit, “Top of the World.” Until the day the rope gave way. Luckily the ground was carpeted with lots of leaves and pine needles, which provided a soft enough landing so that we escaped without any broken bones.

We were entertained when the chinking began. There was chicken coop wire (wire mesh, not chicken coop)  between the logs, and I remember mom smoothing the cement mixture in between the logs, against the wires, only to have the cement slowly roll out a minute later. It was a never ending race of placing the cement, moving on, seeing it rolling out, and trying to place it back in and get it to hold. The walls were taunting us and we thought it was hysterical. (We eventually put 10 penny nails, 1” apart in the logs, and for some reason that helped hold the chinking in, which is still there to this day.)

And this weekend, after 40+ years of enjoying the mountains and our cabin, we closed it up. My parents decided to sell the cabin as it’s getting harder and harder for them to maintain it. We thought that it might take six months or more for it to sell, and they received offers within the first couple of weeks of it being on the market. So we went up to pack up personal belongings and prepare it for the next owners. I didn’t think I’d be as emotional as it turned out I was. It was sad to pack up the quilts that we had slept under, layered and layered upon each other, as in the early days we only had a fire in the den for warmth. It was sad to clean out the cupboard, knowing we wouldn’t make any more meals there, sitting around the kitchen table made from lumber from the original house (it was actually the 5 foot door that separated the living room from the stairwell in the original house, that served the purpose of keeping the heat in downstairs). It was sad to sit on the porch, looking out through the bare trees down to the river which had given us so many delightful memories.

As we were walking back to the cabin after loading the car, mom stopped, looking at the green stalks of daffodils, the yellow flowers still tightly held. With tears, she said she wished that we could have stayed long enough to see them bloom. As we drove out of the driveway, I saw one lone daffodil that had bloomed, in the spot where the swing used to be. “Look, mom, a daffodil bloomed for you.”

View from the porch

Christmas tree farm on the way to the cabin

Tree on the patio 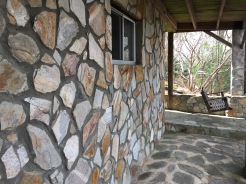 The back lower patio and porch swing 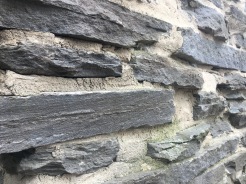 Stones in the chimney