The Legacy Museum: From Enslavement to Mass Incarceration

Sometimes you think you know about something, until you learn a little more, and it’s only then you realize how much more you have to learn.

I had first learned about the Peace and Justice Memorial in an Oprah magazine article earlier this year. My parents had taken a church sponsored trip to the African American museum in Washington, DC and had heard about it there. Months ago, we planned a trip. And last week, I found myself standing at the door of the museum on a cold, drizzly Thursday morning.

We entered the museum, passed through security, and then became immersed in videos and displays for almost four hours. A map showed the exponential increase of slaves in the south after the international slave trade was abolished in the US in 1808. Numbers of slaves were represented by tall red blocks on the map, state by state. As the years progressed through 1810, 1820, 1830, and onwards, the bars grew taller and taller, with Montgomery, AL being at the center of the trade. We heard stories from slaves being prepared for auction, stories of individuals searching for one last moment with their families. We read a giant timeline that covered the entire room, wall to wall, floor to ceiling, with important dates in the history of the US, how whites refused to concede control after the Emancipation Proclamation and the end of the Civil War. Instead of slavery, we had wide spread lynchings and mob violence. For another 100 years, African Americans were denied educational opportunities, the right to vote, and the law of the land was “separate but equal.” The Civil Rights Act of 1964 outlawed

Why isn’t justice mentioned there? Why doesn’t it mention that discrimination in the legal and criminal justice system should also be outlawed? At first I found that interesting. As I continued through the exhibits, I wondered if it was intentional. Or, if it had perhaps been an oversight, one that future administrations would use to their advantage to continue to enslave people of color, through mass incarceration. One in three black men will be incarcerated during their lifetime. One in seventeen white men will be incarcerated. Statistically that can’t be just. That’s a system with bias.

I read to the end of the detailed timeline and my first thought was, “Good god we are fucked. How does an entire people believe that it’s okay to 1-treat people as property, 2- beat said people, 3-deny those people basic civil rights, 4-beat those people more, and 5-institutionalize violence, all based on race?” It wasn’t the only time during our visit to Montgomery that I did not feel hopeful about the future of our society.

Even with two school groups bustling throughout the museum, the mood was reverent. There was a wall of signs from the Jim Crow era, highlighting “Whites” and “Colored.” A whole wall. It was there, in your face, a system that people in power once thought was okay. There were videos of personal stories of how lynchings affected the story teller’s family. Of family members that were lynched. Of how it was, or was not, spoken of in the family. Of relocation to a new location, out of the deep south. There was a display of large glass jars, the type you might see in an old fashioned apothecary, filled with dirt from sites of lynchings, with the lynched person’s name inscribed on the jar. There were videos of volunteers collecting the dirt samples. There were wall hangings of auction dockets of slaves, listing the names, ages, and traits of the people for sale. There were letters from prisoners. There were small cubicles, replicas of visiting booths in prisons, where you could lift the receiver and hear the words and see the video of people in prison. On the sides of the cubicles, there were the rules listed for prison visits.

There were more videos, some animated, some in person interviews, covering more history (like this one, from the EJI website). There was an exhibit about how children are more and more being tried as adults in the criminal justice system. There was a video of Anthony Ray Hinton, an innocent man who served almost 30 years on death row in Alabama. Tears ran down my face, knowing his story was not an exception, and also suspecting I don’t have the capacity for grace that he exhibited. I marvel at men like Mr. Hinton and Nelson Mandela, who have the capacity to forgive. The world is a better place because of them. There was a Civil Rights Wall of Fame, highlighting people who had made an impact in the advancement of civil rights. I wondered whose pictures in our lifetime would be added.

Photos weren’t allowed. I wish they were because it was a lot to take in at once. The EJI website is an amazing resource, and contains similar information as the museum. The museum, though, is an amazing experience. I know that many schools have field trips to Washington DC as part of their curriculum, learning about US history. I wish this site were also added as part of the curriculum. I can only imagine our society would be a better place if every citizen learned this history.

Looking up at the memories of the lynched 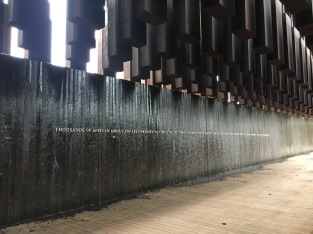 We boarded the shuttle to the The National Memorial for Peace and Justice.

It continued to be a gray, drizzly day. We walked to the entrance and passed through security once again. I get it. And it makes me sad/angry/ready to scream that we have security screening at memorials. We’re entering a sacred space. Why do people have so much hatred that they target people honoring the dead? I know why, and these were the thoughts I had as we entered, slowly walking up the gravel pathway towards the memorial.

It’s striking from afar. It’s more striking as I walked closer. I was among rows upon rows of rust-colored steel pillars, each with a county name and the names and dates of the lynchings that occurred there. Some columns had one name, others had a dozen. As I walked further into the memorial, the ground sloped downward, yet the pillars remained at the same height, hanging from the ceiling, until I was staring up at them, staring up at the memories of the lynched. The rain fell gently, and as the water ran down the steel pillars at the edge of the memorial, it appeared that tears, or perhaps droplets of blood, rolled down the pillars. Tears slowly ran down my face. How, as a society, were we capable of such violence? How, as a society, are we still capable of such violence, but instead of mobs carrying out the violence it’s officers of our justice system? Along the walls were placards with brief explanations of why the lynchings took place: he looked at a white lady, he voted, he was a successful farmer, she protested her husband’s lynching. I thought of the reasons African Americans were killed unnecessarily in the last few years: he was wearing a hoodie, he reached for his license, he was holding a cellphone that police thought was a gun, he was allegedly selling untaxed cigarettes, he was sitting in his apartment. The reasons today seem equally ridiculous as those from the past. Turning another corner, the ground slopes further downward, the pillars hang higher, and I saw these words etched on the wall:

For the hanged and beaten.

For the shot, drowned, and burned.

For the tortured, tormented, and terrorized.

For those abandoned by the rule of law.

With hope because hopelessness is the enemy of justice.

With courage because peace requires bravery.

With persistence because justice is a constant struggle.

With faith because we shall overcome.

I stared at the words and read them over and over. It was a message I needed to see.

2 thoughts on “Thursday: The Legacy Museum and The National Memorial for Peace and Justice”