…my Uber driver asked when I confirmed that I had been at the march that day (I think the two huge painted posters gave it away). The question surprised me, as he was an older African-American man. “Well, I can’t speak for everyone, but I’m happy to share my thoughts. I didn’t vote for Trump in Novem…”

He interrupted me, “Oh, neither did I.”

“Yesterday (inauguration day), I was pretty sad. I was disappointed that our country chose to elect a person who has not shown himself to be very presidential. He’s joked about personally sexually assaulting women. As a woman who has been sexually assaulted, I don’t find that funny. I find it frightening that his comments normalize an atrocious behavior. He’s mocked a reporter with a disability. I find that unacceptable behavior for anyone, much less a supposed leader. He’s said he wants to create a registry of Muslims. Targeting people and treating them differently because of their religious beliefs is strikingly similar to what happened in the not so distant past in Hitler’s Germany. And he refers to “the” groups of people: the Muslims, the African Americans, the Latinos, the Hispanics. He’s separating himself from groups that he’s supposed to represent. I can share more if you’d like.”

“But marching didn’t change any of that,” he said.

“Oh, you’re right. It didn’t. However, silence equals consent. And I don’t want anyone to think that I’m okay with what’s going on. Seems like there are a lot of people out there that think the same way I do. I’ve already heard people criticizing the march, saying “Where were they on election day?” We voted. Trump lost the popular vote by almost 3 million votes. I have no idea how many people marched today, but I’m guessing most of them were at the polls on November 8. Oh, and there’s another reason I marched today. Sometimes you need to do things that feed your soul. Being around hundreds of thousands of other people that are not okay with his behavior is uplifting. It is proof that you’re not alone. That there’s a reason to keep fighting, to keep resisting, to keep acting.”

“I hope he’ll surprise us all and be a good president.”

“I try to keep my mind open to that possibility. Based on what I’ve seen and heard, though, my hopes aren’t high. Until then, though, we’ll march, we’ll organize, we’ll protest, and we’ll do what we can to fight the gross oppression America has harbored for way too long. That’s my idea of making America great.”

He glanced at me in his rear-view mirror and gave me a big smile. “Now I see why you march.” 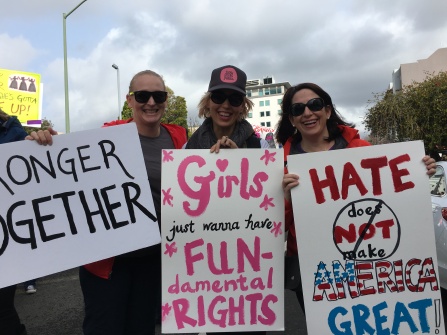 Waiting to start the march 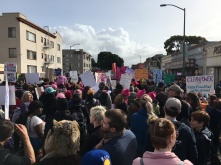 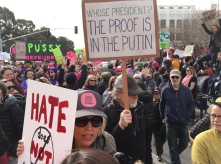 Proof is in the Putin 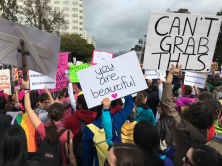 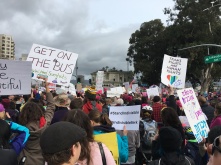 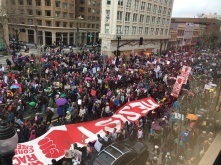 19 thoughts on ““I don’t understand the purpose. What good does it do to march?””