I’m in Washington, DC this week for work. My teammates and I walked through the city this evening, passing by the Capitol, listening as the symphony played out front, timpani drums booming. We walked further and found ourselves gazing at the  Supreme Court. I walked up the numerous steps to the massive door of the Supreme Court, reliefs etched into panels. I stared upwards at the huge columns. I touched the elaborate carved marble and felt shivers on my arms. This was where so many important decisions had been made. Brown vs Board of Education. Loving vs Virginia. Roe vs Wade. United States vs Windsor. Obergefell vs Hodges. Laws that guaranteed civil rights to all people, not just the ones who had previously accessed such rights to education, marriage, health decisions. I walked away as the moon rose feeling hope that, yes, our government is (eventually) a force for good.

As we turned to head towards Union Station, we passed the United Methodist Building. I identify as a Methodist. It’s been a part of my identity since I was five and my family moved to Rural Hall, NC. I’ve had periods throughout my life where I struggled with my faith, wondered if there was a capital G God, and preferred to sleep in on Sundays rather than attend worship service. But for the most part I value my Methodist upbringing. It’s one of inclusion and tolerance, mostly.

As we passed the building, I noticed the marquee had a phrase on it. I like to read church marquees; they often are a source of clever puns. This is what I read:

“Let Us Not Tire of Preaching Love”

And I was angry. Really angry. How about we recognize love instead? And not discipline clergy who perform same-sex marriages or clergy who are in same-sex relationships? It’s up for discussion in committee, but does it really need to be discussed? We say that all persons are of sacred worth. We say that we believe in grace.

Let’s believe in love in all forms. Let’s not just preach about it.

We can do better. 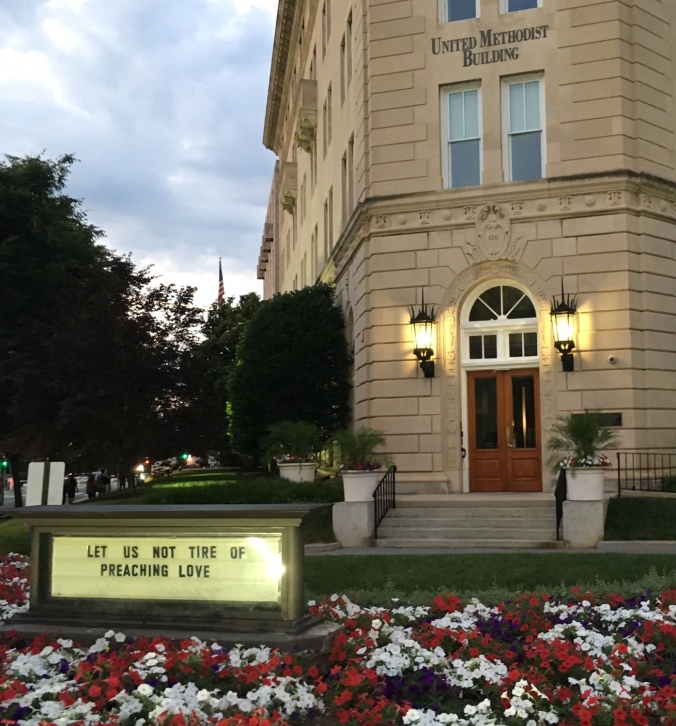