A twelve hour layover in Seoul. I was excited when I saw that was one of the cheapest flight options returning from my trip to Vietnam. I haven’t returned to Korea since I left there in 2002. A layover with a good friend, what could be better?

I called a couple of days before the layover to make reservations at a traditional Korean restaurant. “Anh-nyoung ha sae yo!” and was greeted similarly. I love the sing song of the Korean language. My voice rises and I smile when I speak. I inquired about reservations, and they asked my name. “Lo-ri.” “What?” Then I remembered. “Ro-ri,” I said. “Ahhhh! Ro-ri! See you Friday.”

We landed at Incheon. Ah, Seoul. So many memories. During my stay in Korea, I lived in Daegu, but flew in and out of Seoul many times. My last goodbyes before passing through customs. Memories flooded over me.

We took the train into the city, watching the sun rise over a river. 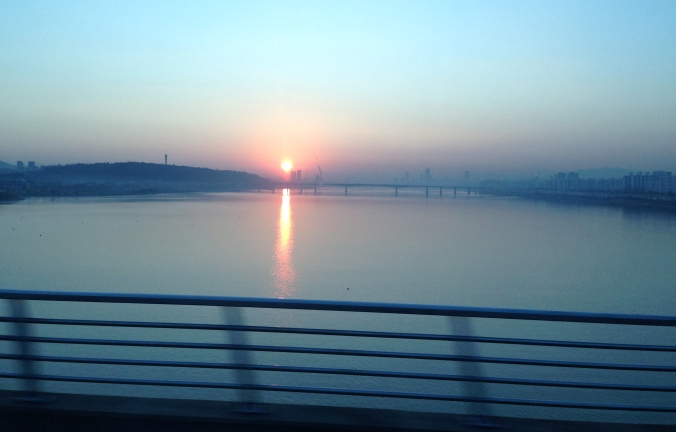 Sun rise from the train

We arrived into the city. Cheonggyecheon had been built since my last visit. We walked along the stream, early in the morning, before the streets were full of people. 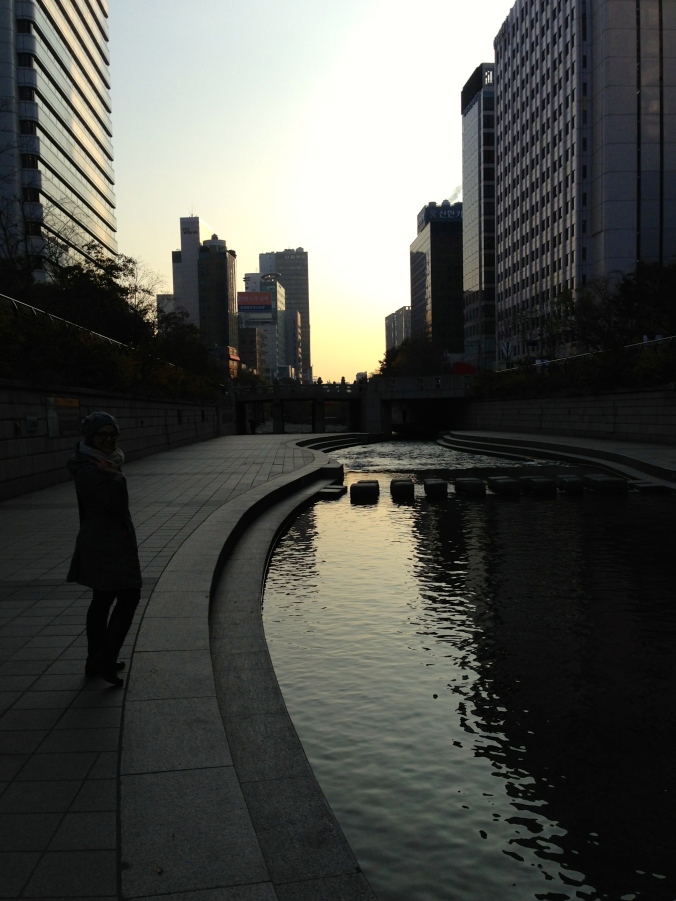 Cheonggyecheon early in the morning

We were hungry, but didn’t want the wares McDonald’s, Starbucks, Lotte, or other fast food chains had to offer. We wandered in and out of alleys, until we found a small (four seats) take out restaurant that offered hot jook for breakfast. Kim-chi jook – ahhhhhhh! 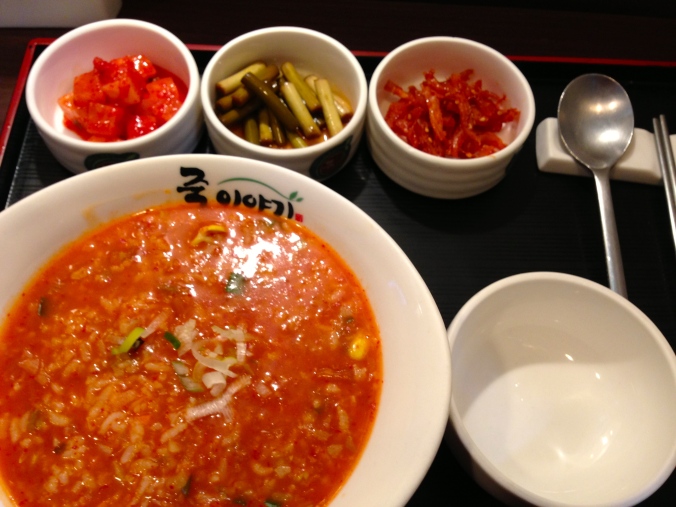 Warm and happy, we ventured to Gyeongbokgung Palace. We arrived just in time for the changing of the guard! Boom! Boom! Boom! went the drums. The soldiers marched in formation towards the gates, marching in unison. Brilliant robes fluttered in the wind as the guards took their position. 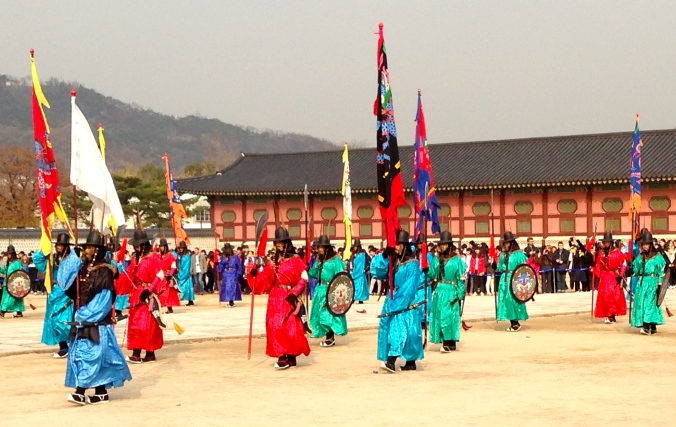 Changing of the guard at Gyeongbokgung 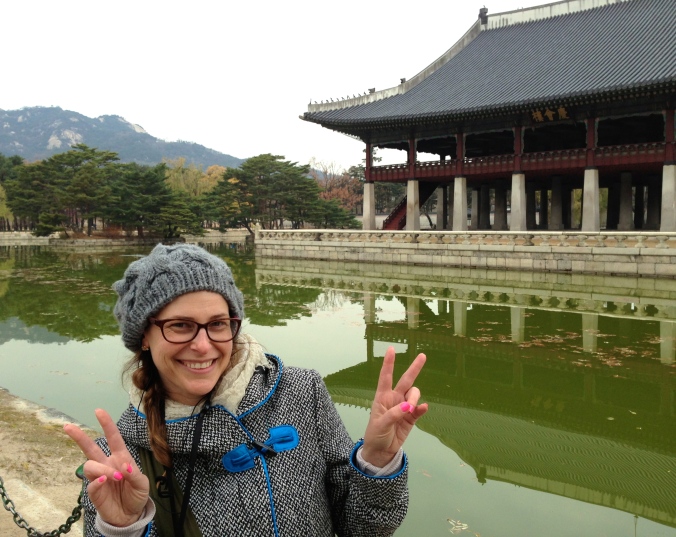 We had heard about Tom’s Cat Cafe near Hongkik University. We navigated the maze of the subway, and after wandering for a while, stopping in a coffee shop and asking the way, randomly questioning students on the street, finally with the help of the very kind tourist police in all red, we found our way there. We couldn’t tell if it was open or not – no one was there except the cats, but the doors weren’t locked. We stared through the windows at the beautiful cats, then made our way across town for a traditional Korean lunch. 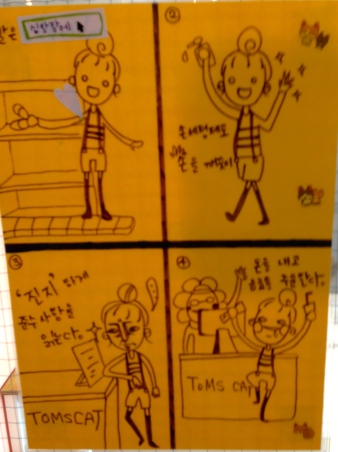 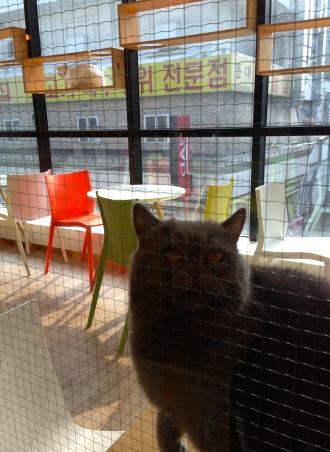 Cats looking at us from within 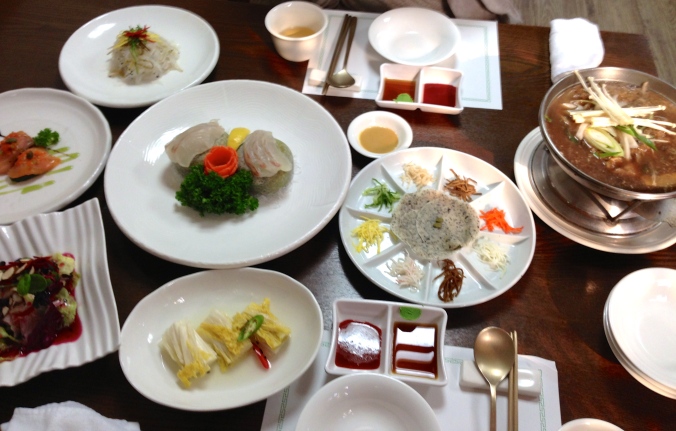 The first of our 21 dishes for lunch!

We made our way back to Incheon. Satiated with a day of Korean culture.