I wanted to go, and at the same time I didn’t want to go. I imagined that it was one of those experiences that I would remember, or that would move me, but wouldn’t necessarily be fun. I hadn’t planned to visit a concentration camp; the opportunity snuck up on me. In my limited understanding of world history, I assumed all the concentration camps were in Germany. While perusing tourist opportunities here in Prague, I came across an ad to visit Terezin, the Czech concentration camp. I decided to go.

We drove an hour north of the city. We entered a museum of sorts, filled with memorabilia and documentation in Czech, German, English, and Hebrew. There were photos. Drawings. Diary entries. Yellow Star of Davids with “Jude” written in them. Video clips. Rosters. Quotes. Two floors of history. And a showing of a propaganda film, “The Gift of a Town.” I took all this in, interested, curious, realizing my knowledge of World War II has  significant gaps.

Next, the cemetery. We walked down a long road flanked by trees losing their leaves. The first thing we saw was an oversized menorah, surrounded by hundreds of identical tombstones. The day was cold and grey, fitting for visiting a cemetery. I walked among the tombstones, noticing that small rocks had been placed on top of many of them. The tour guide called me to join him near a building. 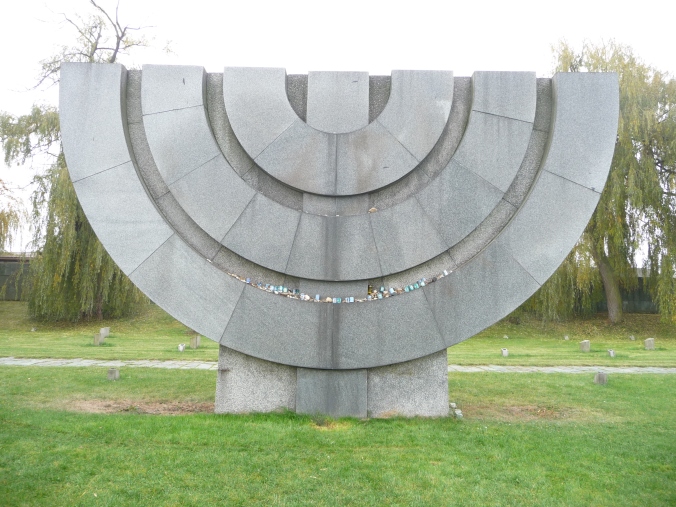 “We’re now entering the crematorium,” he said as he walked ahead of me. Oh, wait. Crematorium? I didn’t remember reading that on the brochure. I hesitated. Was this really something I wanted to do? Not sure, I followed.

As I entered, I felt as though the air had been sucked out of my lungs. Even after 65 years, death was present. I quietly walked around, lit a candle, said a prayer of remembrance, then waited outside.

Our next stop was the Small Fortress. This was where political prisoners, Jewish and non-Jewish, were imprisoned. Because I was the only English speaker in our French tour group, I had my own guide, Camille. She led me through various blocks, group cells, solitary confinement cells, the sick room with only 12 beds (more people were sick than that, she explained, but most stayed in their group cells, infecting the others), and the arch which read “Arbeit Macht Frei” – work will make you free. She leaned over to me in a confidential stance. “Of course,” she whispered, “that was a lie. Once you entered the Small Fortress, you were never free.” We continued walking.

We walked through more blocks of cells, then came to an opening in the wall. We stopped. “This is a happy place. This is where three prisoners were able to escape.” Camille then explained that others attempted escape, were caught, and were executed, in addition to a few prisoners selected at random, to act as a warning to the other prisoners not to attempt escape.

“Are you claustrophobic?” I shook my head no and she motioned for me to descend stairs to a tunnel. The ceiling was barely six feet; I could feel how close the top of my head was to the rough stone. “Walk,” she said. I walked; she followed directly behind me. I assumed that at the end of the tunnel there would be another staircase leading back outside. Instead there was a turn. And another long tunnel. And another. After about ten minutes of walking in silence, I began to second guess my confident answer claiming I wasn’t claustrophobic. This would be the ideal place to commit a murder. Camille wouldn’t kill me, though, right? I mean, surely the Frenchies would notice I was missing. The tunnel became more and more narrow.

Why wasn’t she sharing tour information with me? She had been quite chatty up until that point. “So, what were these tunnels used for?” “The Germans blocked them off. They weren’t used for anything during WWII. Before, however, when this was a fortress, they would lure enemies into the yard outside then shoot them through the small gun holes.” Oh. After what felt like an eternity, we emerged from the darkness. Into the execution yard.

Stories of execution were followed by a tour of the officers’ quarters (they even had a swimming pool and a cinema) then another cell block. Towards the end of the war the Germans didn’t want any prisoners near the advancing front, so they transferred prisoners to an already crowded Terezin. Group cells that were meant for 50 people contained up to 400.

And with that, the tour was finished. Not fun, but forever etched in my memory.