Technically a hermitage is a place where someone could live in seclusion. After spending the day at The Hermitage Museum in St Petersburg, I can see how that could happen here. Even following a detailed map, I doubt I visited every room. Hundreds of rooms, many hours, and two very sore feet later, I was more than satiated. I was absolutely overwhelmed by the architecture, the grandeur, the artwork, the gardens – by everything in the palace. I wandered from room to room, staring at the ceilings, the parquet floors, the wallpaper, the furniture, the doors, and, oh, yes, the art on the walls. Surprisingly, there were only a couple of occasions when the rooms were crowded, those times when tour groups were barreling through. Most other times, I was alone, staring at artwork by familiar masters – Renoir, Michelangelo, Gauguin, Monet, Manet, Matisse, Picasso, El Greco – amazed at how it all came to be housed in one place.

By lunchtime, I had covered most of the 2nd floor, the floor that exhibits former palace rooms and furniture, as well as 17th and 18th century masters – lots of Jesus and Mary; cherubs and angels; fruit and still lifes. After lunch I made my way straight to the third floor where the Impressionists and relatively more modern artwork were housed – my favorite. I savored each room devoted to an individual artist, seeing paintings in person I have read about for years. I sat on one of the many red velvet covered benches and stared, somewhat incredulous that I was seeing so much beauty in one day.

As I tried to make my way back to our group’s meeting spot, I found myself trapped in the basement/first floor, wandering through antiquities, archeological findings, and statues. I followed the map, trying to make my way back to the Grand Staircase, only to find myself met with roped off doors and hallways and exit signs (that security told me didn’t lead to exits). I asked one of the babushkas present in every room, with a Hermitage id card around her neck, how to get back to the Grand Staircase. “Stairs. Upstairs. Right. Straight. Long hallway. Down stairs.” Before I could thank her, she said, “If you must.” And then sat back down, staring into space.

On the second floor, I tried to follow her directions. And found myself in rooms I hadn’t seen before. Could one ever see all the rooms in the palace? I realized I had snapped several hundred pictures, and was fairly certain that none would capture the true grandeur of the palace.

We exited the Metro at Nevskiy Prospekt, one of the main streets of St Petersburg. Women navigated brick and cobblestone sidewalks in 5-inch heels. I held my breath as they clicked along, anxious that one would catch her stiletto in a crack and tumble. It never happened. Old babushkas stumbled along slowly, hunched over from the weight of years of hard labor. One store window contained brightly colored jerseys of the Russian Olympic team with bold swirls of red and blue. Another contained layers of ecru, pink, and lime green macaroons arranged in a Christmas tree formation. Yet another advertised dozens and dozens of matryoshkas, the brightly painted, stackable wooden dolls. 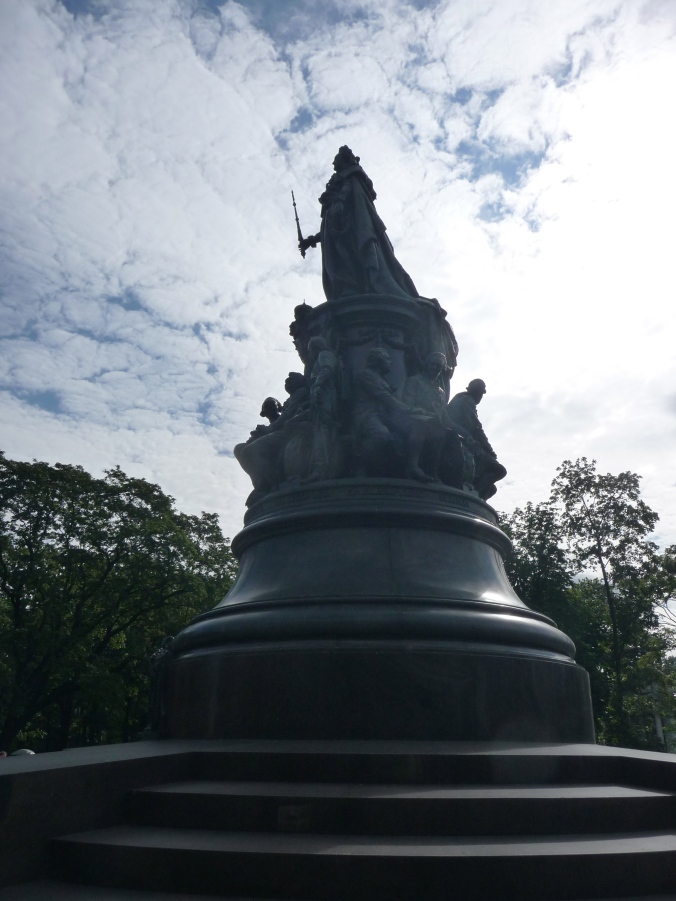 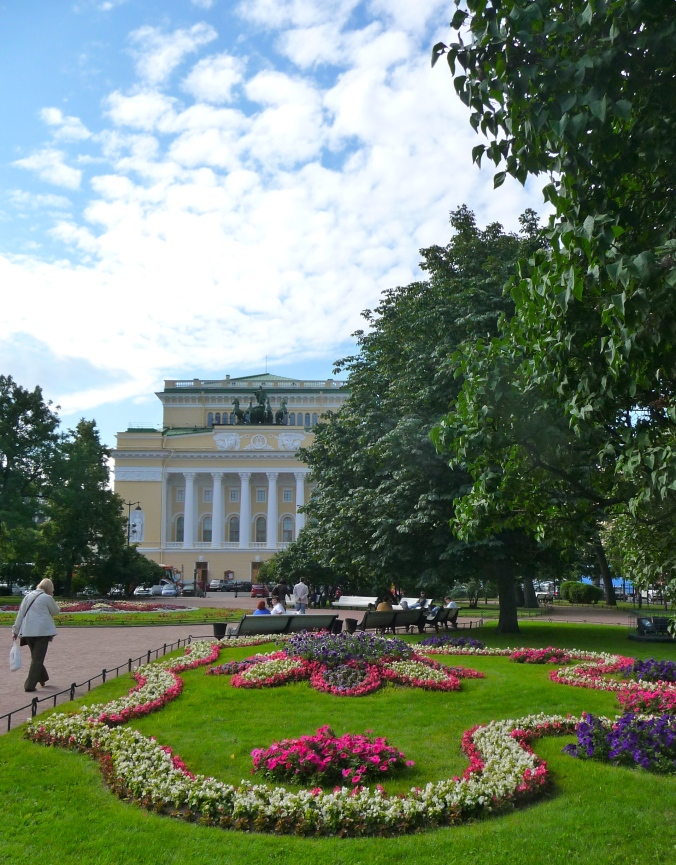 We crossed the street and entered Ostrovsky Square, greeted by men and women hawking river tours over loudspeakers, flanked by vendors selling soft drinks and ice creams from mobile carts. We entered the park, walking around a huge statue of Catherine the Great and her advisors, towards the Alexandrinsky Theatre. Beds of bright pink, purple, and yellow flowers bloomed along the path, making the overcast day seem brighter. 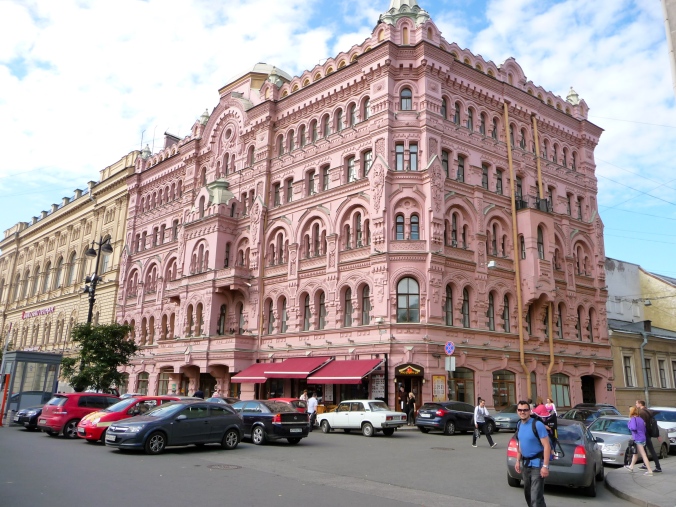 We rounded the corner and were met by huge buildings which Stas described as neoclassical Russian architecture, but I dubbed wedding cake architecture. Floors and floors of buildings sat like layers of cakes, decorated by multiple arches and curlicues. Some were pink, some white, some pale yellow. It was as if we were walking through aisles of a bakery, only instead of cakes, we were viewing buildings. And so many beautiful buildings! Around every corner we saw a building even more beautiful than those we had just passed. We’d stop and point and ask, “What’s that, Stas?” He’d look, and more often than not say, “Offices. Administrative building. Business.” Nothing out of the ordinary happening there, yet stunningly beautiful. 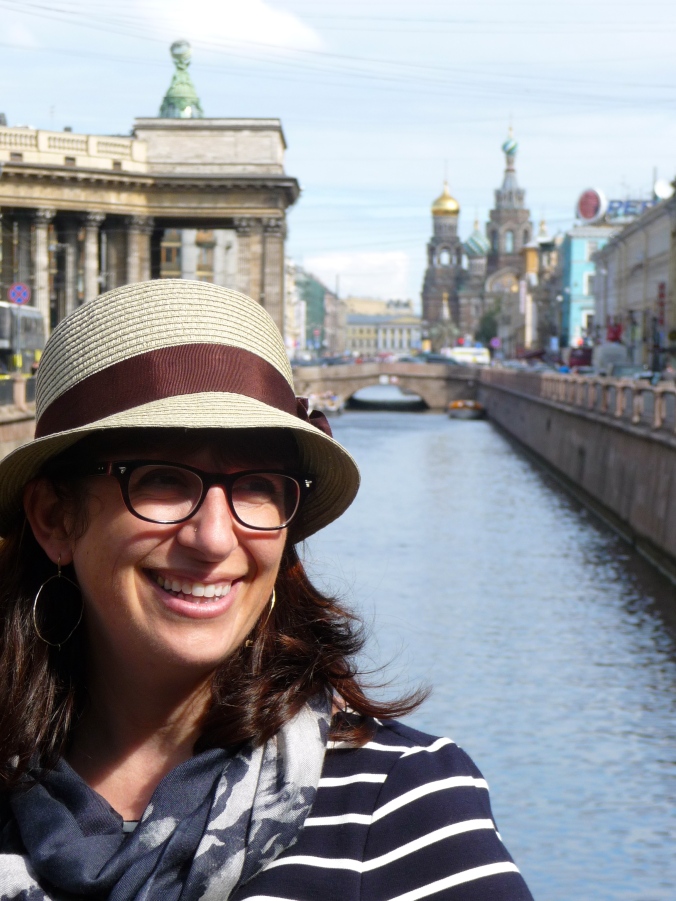 On the Bankovsky Bridge, with the Church on Spilled Blood (right) and the Lady of Kazan Cathedral (left) in the background

Stas led us to his favorite bridge, the Bankovsky Bridge, a tiny pedestrian bridge with griffins guarding each side. As we walked across, he instructed us to look in the distance. There it was! The Church on Spilled Blood! The famous Russian Orthodox church that looks like it’s made of candy. It’s called the Church on Spilled Blood because this was the exact spot where tsar Alexander II was assassinated.

My first introduction to Russian Orthodox churches was at Disneyland when I was a young girl. One of my favorite rides (despite the annoying theme song) was “It’s a Small World.” Replicas of Russian Orthodox churches soared behind little Russian children mouthing, “It’s a small world, after all….” I remember thinking that if such buildings really existed, they must be the most beautiful in the world. The colors! The angles! The towers!

At some point years later I realized that yes, the buildings were real. In my mind, I thought, “I’d love to visit one in person.” And now I’m here! I stared up at the towers, marveling at the colors and the intricacy of the design. It’s magical. Every bit of the building is beautiful. 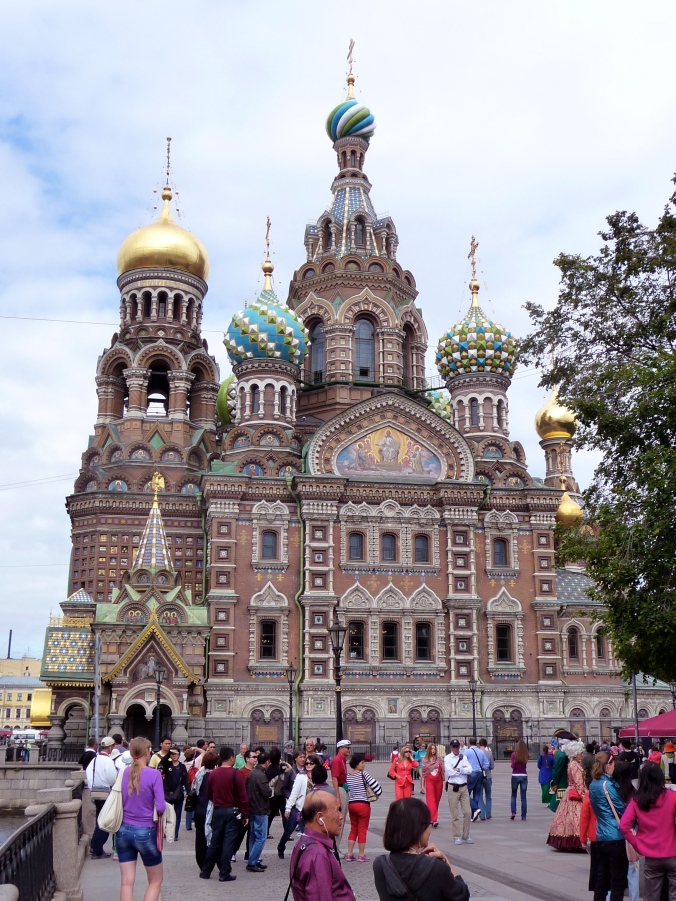 Approaching the Church on Spilled Blood

As I walked in, I stopped and gasped. As beautiful as the outside is, the inside is even more so. Every surface is covered in mosaic. My eyes rose upward, staring at the brilliant jewel toned tiles that made up pictures of saints on each of the columns. 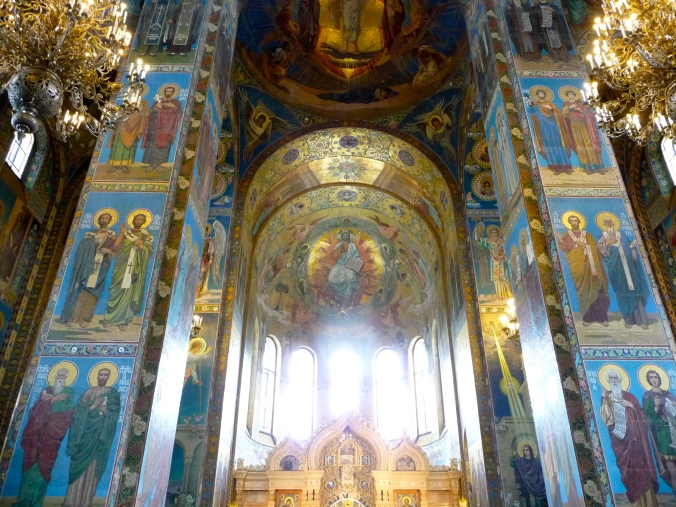 Inside the Church on Spilled Blood

I stood, enjoying the silence of the church, marveling at the craftsmanship and ingenuity it took to create such a spectacular memorial. I backed away, then came close to each mosaic. I shifted my position slightly to see the play of light on each tile. I walked around, then came back again. I closed my eyes for a few seconds, then opened them, each time amazed at how stunning the space continued to be. 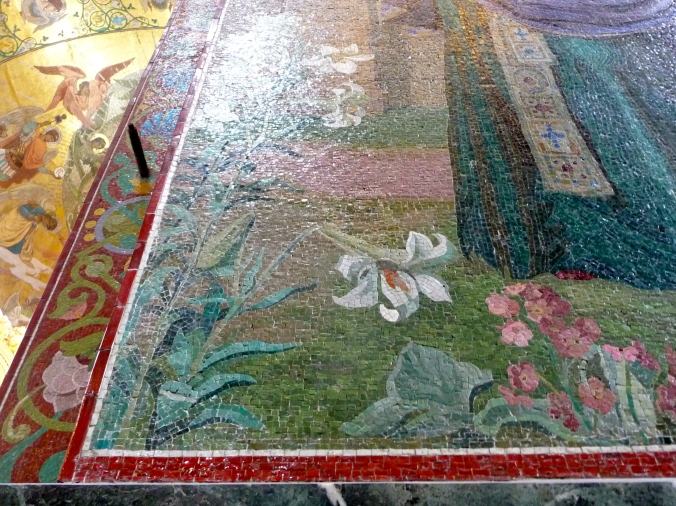 Close up of a tile mosaic

After a long while, I exited the church, turning one last time to stare. And smile.

I’m staying in a small bed and breakfast in St Petersburg. It’s lovely and the staff are incredibly patient with my thwarted attempts at Russian. Each room is decorated like a different major city or part of the world. I’m staying in the Savanna room, which, as you can see by the picture, is decorated like an African savanna. What is so confusing is that I stayed in a room decorated very similarly to this in Kruger, South Africa. Every morning when I wake up I have to remind myself I’m in Russia, not South Africa. Even though I am in the savanna. 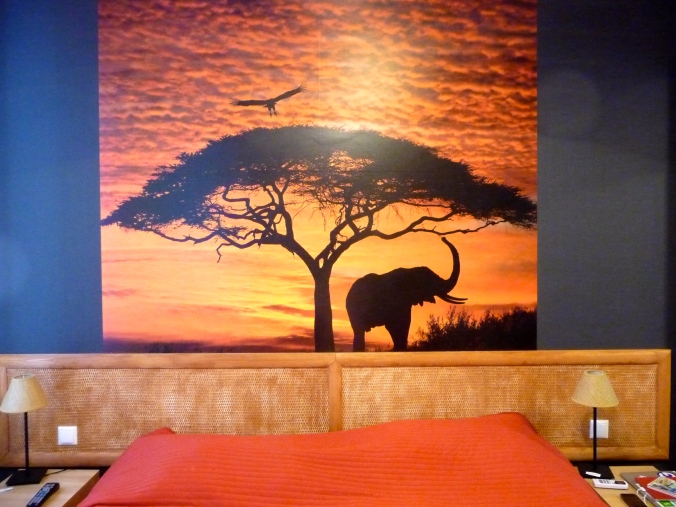 Stas’ niece arranged a three-hour, English language overview of the city tour for us on our first day here. Having arrived at 2 am the same morning, you could see a head or two nod off as we drove from site to site. It was simply a taste of the city – passing by all the sites we should go back and visit in-depth during our time here. I was surprised at how European  St Petersburg is – wide avenues, a plenitude of manicured parks, and beautiful pastel buildings with ornate grill work. And the water! So many rivers, canals, and boats. It’s going to be a fun week.

We had planned to go to Russia in May. Unfortunately, Stas’ Russian passport didn’t arrive in time. We postponed our trip until August, hoping his passport would arrive in time. It finally did. Next step: visas for the rest of us.

I went to the online visa application. I began completing the questions. The questions were pretty standard, father’s full name, mother’s full name, marriage status. And then came the question that stumped me. List all the countries that you’ve traveled to, by year, for the last ten years. I got my passport out, and looked at all the stamps. And made a list. And sorted it by year. Then filled in the 55 entries of all the countries I’ve been to over the past ten years.

I waited the requisite seven business days and received my passport back, the visa taking up a full page. I studied the Cyrillic letters, somewhat in awe that I’m really going to Russia. Russia!

I’ve wanted to visit Russia ever since we were shown cold war propaganda films in the sixth grade. Of the peasants in the fields, with nothing to eat but potatoes, of citizens lining up outside of GUM department store. When I saw that, I wondered, “What are the Russian children seeing about America? Wonder if any of this is true?”

Russia’s changed since then. And tomorrow I’ll be on a plane, headed to St Petersburg. Russia!