I’m in the very lucky position of being in New Zealand with a group of my work colleagues. Before we arrived, one of them sent out a survey of potential activities we could do for fun. This included a list of various extreme sports: zip lining, river boarding, canyon swinging, bungee jumping, canyoning, street luging, and rally carts. When I visited the web pages for each of these activities, my first reaction was “Wow! That looks like so much fun!” And then I thought through the logistics. Jumping off a platform into an abyss, dangling from a single thread? Hmmm.

The first of the fun activities was upon us: bungee jumping. Not everyone wanted to participate in bungee jumping; I could have very easily chosen to be in the group that watched. The thought of bungee jumping scares me. The last time I had a chance to bungee jump, I didn’t. I was in Zambia, and I had the chance to jump over the Zambezi River, with Victoria Falls in the background. I chickened out. (Yes, that was the same place where this happened recently, so maybe it was a good thing I didn’t do it.) I’ve always wondered, though, “What would it have felt like, to plunge through the air?”

We filled out the requisite forms. We were weighed, asked if we had any health problems, then given forms to sign to the effect of “I realize this is the most dangerous thing I’ve done in my life and release you from all responsibility when I get killed, maimed, or otherwise physically altered…” I signed and we went down to the platform.

The butterflies in my stomach increased with each step, culminating as I crossed a narrow bridge to reach the platform off of which we would jump. I watched two of my colleagues jump before me. It looked fun. They came back. No problem, right? I couldn’t look at the edge of the platform. The guys that worked there harnessed me into straps. I told them it didn’t feel tight enough. They said it was. One brought me to the edge of the platform and told me to look at the camera. I looked up at the camera, pointedly refusing to look down off the platform. I had a sudden fear he was going to push me off. I took a step back.

He said that he would count down, and then I would run and jump. I likened this to diving off of a diving board. Just without the water. He started the countdown. “Wait, wait, wait! I’m not quite ready.” “Better to just do it,” he said, “Don’t wait too long.” I took a few deep breaths. He began the count down again.

I sailed into the air. Falling, falling, falling down towards the earth, with majestic evergreens surrounding me. In my mind, I pictured myself doing a swan dive, gracefully meeting the earth (on the video I watched afterwards I realized it wasn’t as graceful as I imagined).

It wasn’t until the bungee tugged on me that I let out a scream of joy. What fun! What freedom! To be suspended in the air, twirling, with beautiful Queenstown below me. I laughed as they pulled me back up to the platform. “That was so much fun! Oh, my goodness, that was so much fun!”

“Aye, want to give it another go?”

Without a moment’s hesitation, I said,  “No, thank you!” As fun as it was, once was enough.

I woke up before my alarm went off; my reward was to watch a blinding sun rise over the mountains. This is a view I could never tire of. 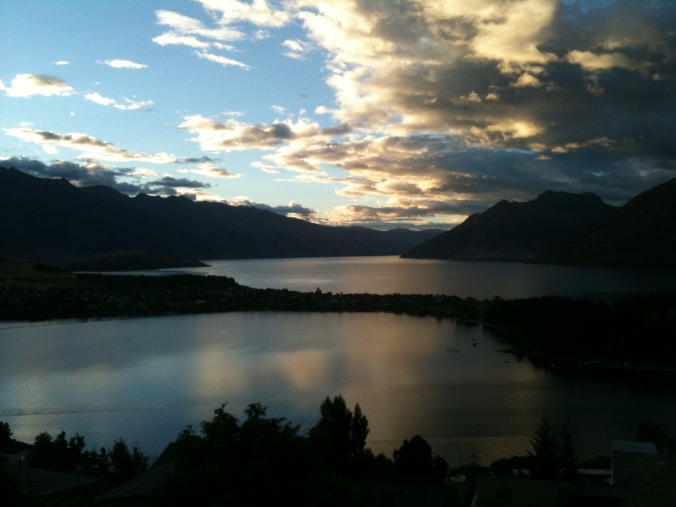