Just enough crispness in the air and not too many people on the path made for a lovely midday hike through a forest shedding its leaves, interrupted only by the occasional squirrel foraging for food. 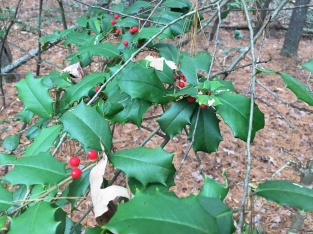 While in Scotland, we wanted to visit the countryside and we wanted to stay in a castle. This is where Google is amazing. If you Google “stay in a castle in Scotland” one of the first results is a website that lists all the castles where you can stay in Scotland (as expected). We chose Glenapp Castle, a couple of hours train ride away from Edinburgh, and watched the scenery get greener and greener and more expansive the farther west we traveled.

The taxi driver picked us up at the tiny train station, and spoke to us about his profession (electrical pole raising), his mother’s summer house (up the cliff), the Ailsa Criag (where curling stones are mined), and the state of the sea. We told him we were from America and he smirked slightly and responded, “I guessed.” We passed a roundabout with a large stone ship that asked, “Whit’s yer hurry?” A good reminder for the upcoming weekend.

We turned down smaller and smaller roads until we reached a gate, followed by another small winding road leading up a hill. And then, around a curve, the castle! With gates! And turrets! And dormer windows! And a fountain! We squealed and asked the driver to stop so that we could take a photo from farther out (not minding the rain that was falling).

Our first view of Glenapp Castle

We entered a grand hall and were taken on tour: the dinner dining room, the breakfast room, the sitting rooms, the library, the outdoor patios and terraces. Despite the weather, we were ready to explore. We donned Wellies (Wellies!) and raincoats, foregoing umbrellas, and set out to walk the grounds (how proper!). 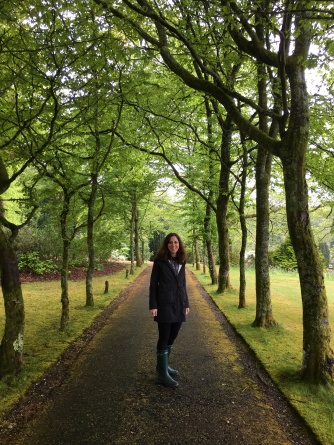 Exploring the grounds in Wellies

First stop, the Tea House. Which was as cozy and adorable as it sounds. Low ceilinged, slightly sloping floor, small tables just close enough apart, handmade lace and mismatched tea cups displayed on the walls. After a cuppa, we ventured to the conservatory, breathing in that earthly, humid, floral smell of greenhouses. As someone who is almost always in cities, it’s such a treat to be surrounded by plants. We admired the delicate African violets, breathed in the thick sweet smell of the honeysuckle, and marveled at the incredibly tiny bunches of grapes blooming on vines. 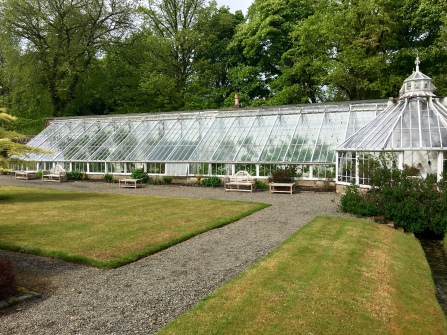 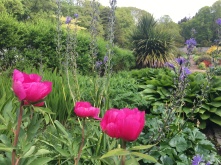 We meandered to the herb garden, greeted by beds of fragrant rosemary, velvety sage, and bursts of purple blooming clover. We strolled to the Azalea pond, marveling at the picture perfect view. It was almost too perfect, the pond, sprinkled with lily pads, lined with flowering azalea bushes in all colors: cotton candy pink, neon magenta, fiery red, heavenly yellow, flaming orange. We sat on the bench and took in the beauty, catching up on goings on since we last saw each other. 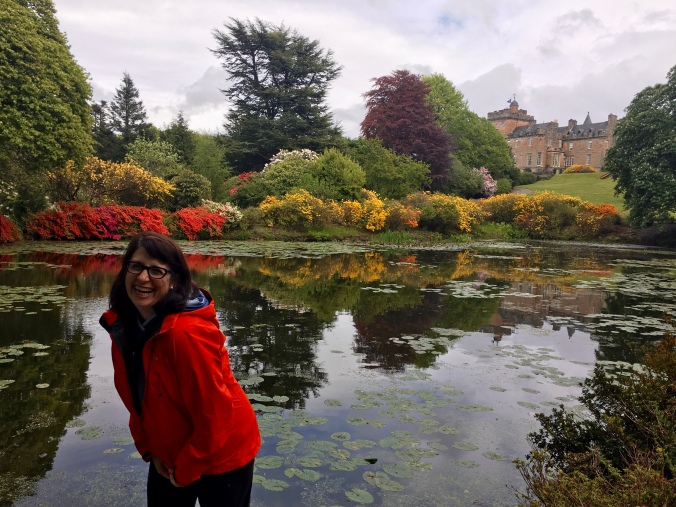 Laughing by the azalea pond

We continued exploring, through the dense woods filled with beds of surprisingly intense blue bonnets, across the yard, littered with fallen petals, down narrow paths, not sure where we’d end up. We made our way back to the castle and discovered a croquet lawn. Not entirely sure of the rules (or the object of the game), we made our own, whacking the ball through wickets and high fiving each other when we were successful.

Croquet at the castle 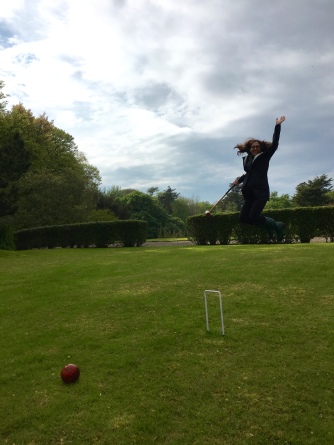 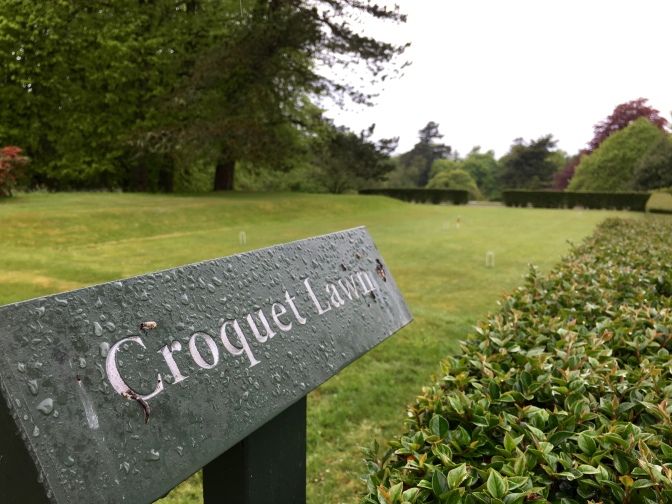 We decided it was time for a glass of wine on the patio. Inside, we selected a vintage, and asked if they could bring it to the patio. There was a split second, just a glimmer of surprise, on his face before he said of course they could do that. We sat in the very brisk dusk, overlooking the sea, as rain spitted from the sky. Not heavy enough to require umbrellas, just enough of a mist to barely wet your skin. We talked about what we would do the next day – a boat trip to Ailsa Craig or a hike along the coastal bluffs? It’s a good thing to be forced to choose between only excellent options.

Over dinner we discussed our options and decided on the 8-mile hike along the coastal bluffs. With each of the six courses we chatted and tried to keep our laughter at an appropriate level in the very hushed, very formal dining room. The conversations of other tables couldn’t be heard. The laughter of ours could. Before one course, I asked our waiter, Hugh, “So who owns this castle?” He motioned for me to keep my voice down and mentioned it was the gentleman in the corner.  Hugh shared the history of the castle, including the disappearance of a former owner’s daughter, Elsie Mackay, aka the actress Poppy Wyndham. We asked if there were ghosts, and he indulged us with stories of sightings. We said we hoped that we encountered a ghost during our stay. (we didn’t) 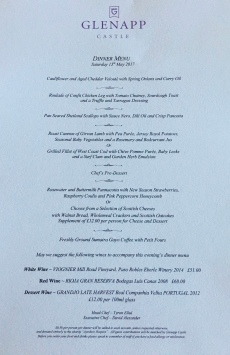 On Sunday we enjoyed a traditional Scottish breakfast (haggis is delicious) before embarking on our coastal hike. To be in the countryside, nary a soul in site, on a beautiful sunny day, on the coast of western Scotland, is pure heaven. We traipsed through meadows filled with sheep and cows, and spotted shy deer, bunnies, and partridges on the path. We climbed jagged hills strewn with rocks and walked through grassy leas. Mostly, though, we simply enjoyed the stunning beauty of the countryside, already planning when we could return and experience more of lovely Scotland.

Leading to the sea 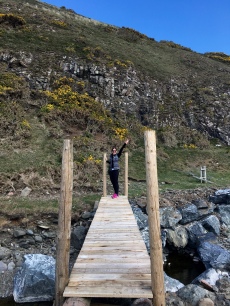 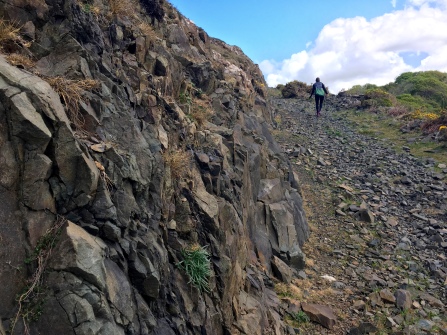 Cows on a hill

Walking to the bluffs

Down by the sea 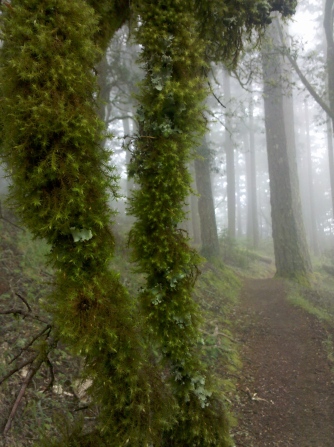 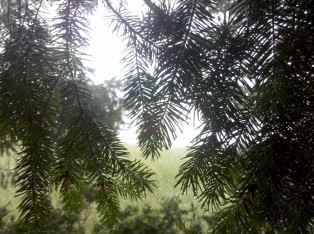 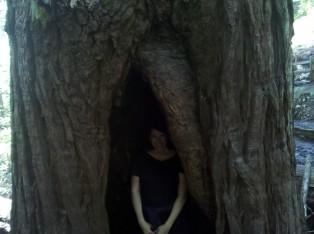 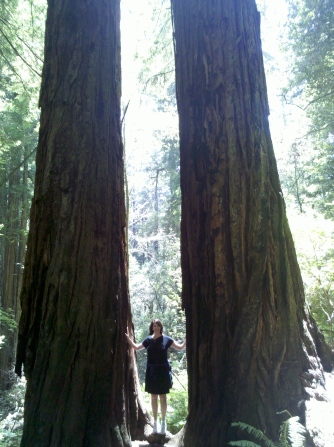