A morning walk on an almost deserted beach; a swim in the not too cold, but brisk enough to be refreshing, ocean water; lounging on the balcony reading for hours (and possibly a nap or two), surrounded by fierce howling winds; dinner al fresco in the old town, watching tourists and locals leisurely stroll by. I wouldn’t change a thing.

Santa Marta – view from the balcony

We were sitting by the fire, discussing restaurant options for Friday night in Bogota, then a road trip to Villa de Leyva on Saturday morning. The phone rang, and even though my Spanish is limited, and even though I was hearing only one side of the conversation, I could tell something bad had happened. He hung up. A friend’s mother had passed away unexpectedly and the funeral would be either Friday or Saturday. We immediately changed our plans to drive to San Martin the next day.

As we drove, the buildings morphed from high-rise apartments to one and two story buildings, lots of stores and service shops lining the highway. After more than an hour, I asked where we were. Laughingly, they said still in Bogota. I took notice when we finally made our way out of the traffic and out of the city. The landscape opened up to grassy fields and craggy ridges. We descended down curvy roads, stopping at roadside arepa vendors for nourishment.

Arepas by the side of the road

After many hours of more traffic than expected, we arrived at the funeral parlor, located just beside the main church in town. We paid our respects, gave hugs, offered words of condolence, then walked across the street and sat across from the main plaza, slowly sipping Poker beers in chilled steins. Young people on scooters cruised around the plaza, occasionally yelling to each other, flirting, laughing, posturing.

Surprisingly, I awoke before the others. I dressed and headed poolside, taking advantage of the calm of the morning to relax, sip a cup of tea, and read several chapters of my book before the others joined. After breakfast, we relaxed by the pool for a few hours before preparing for the funeral.

We arrived to the plaza and slowly walked around. Tony pointed out a tree to me. “One day a year, all the flowers fall. Today’s the day.” We stood, looking upwards as pink blossoms slowly floated down, creating a pastel carpet around us. On the twelfth toll of the church bell, we walked across the street.

The vaulted ceilings of the church provided a perch for several birds who quietly flapped during the service. I listened to the cadence of the Spanish, following the lead of the others: stand, sit, kneel, stand. A bead of sweat trickled down the nape of my neck, continuing down my back. The coffin was brought to the rear of the church, out the doors, then into the coffin, which slowly drove to the graveside, followed by a multitude on foot brandishing parasols to shade them from the hot sun, families on mopeds, and a few slow moving cars.

We gathered around the graveside. The coffin was lowered. The priest said a few words; we heard choked sobs. The heat of the sun drove several people to the shade of the cemetery wall as the coffin was covered with shovelfuls of fresh dirt. More hugs, more remembrances.

We stopped for lunch before leaving town; the menu consisted of carne asada or soup. Three of us ordered carne asada, which came with generous portions of yucca and potatoes. One ordered soup, then envious as our plates arrived, ordered carne asada as well. The meat was cooked to perfection. Crispy charred edges enveloped juicy tender strips of meat. Dogs circled our picnic table, hoping for a scrap to fall. None did.

On the way to Villavicencio, we stopped at roadside fruit vendors. Pineapples, oranges, mandarins, bananas, watermelons, coconuts, mangoes, apples, papaya, and more beckoned us. The vendor offered us teeny tiny bananas to sample as we decided what to buy. We left with bags of incredibly sweet pineapples, watermelon, and baby bananas. 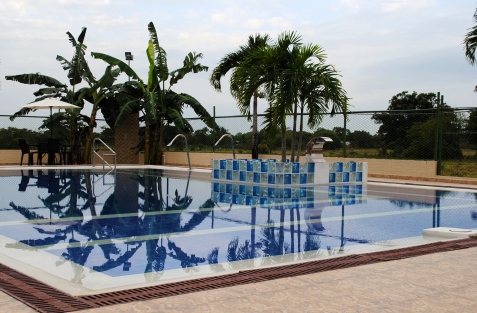 “It’s on this street. Or maybe the next.” I wasn’t sure where we were going, just that we were trying to find a restaurant that Tony had had a good meal at previously and had been hard to find.

We rounded a corner and hidden among the brightly colored buildings was Maria Candelaria’s. We rang the buzzer and waited as a short, white haired woman in faded blue jeans (perhaps Maria?) shuffled to unlock the glass doors. She ushered us to a table on the patio where an elderly man explained the house specialties. As soon as I heard “albóndigas” I knew that was what I had been craving. Enjoying the warmth of the afternoon sunshine and the brilliance of the flowering blooms on the patio, we noticed a sign above us that read “No servimos comida rápida.” We laughed and settled into casual conversation, watching the elderly couple shuffle back and forth between customers, the locked front door to let guests both in and out, the kitchen. Sooner than we expected, our lunches arrived in individual cast iron pans, piping hot. I oohed and ahhed with each bite – stringy, melty cheese. chunky, fresh tomato-y ragu. tender, savory meatballs. 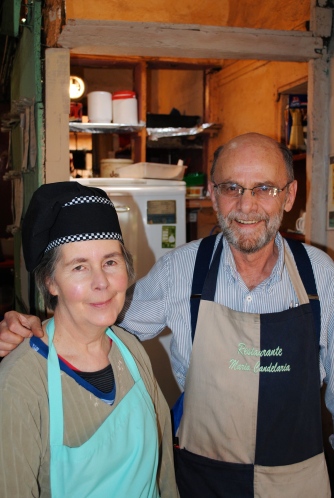 Courtyard at Maria Candelaria’s
Afterwards, we continued through the narrow cobbled streets, searching for a once visited patisserie. After only a few turns leading us to other destinations, we found it. We leisurely enjoyed cappuccinos and treats.

We made our way across the plaza and entered El Museo del Oro. Four floors showcasing pre-Hispanic gold in Colombia – dark halls with subdued spotlights highlighting the richest of the treasures. I couldn’t quite reconcile the opulence with the antiquity; the pieces looked as though they could be on display in a modern jewelry shop. 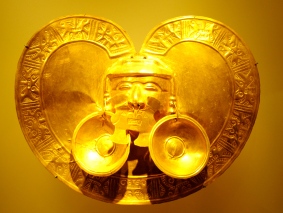 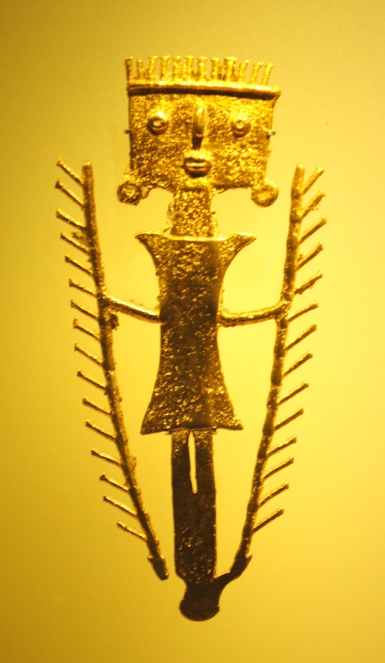 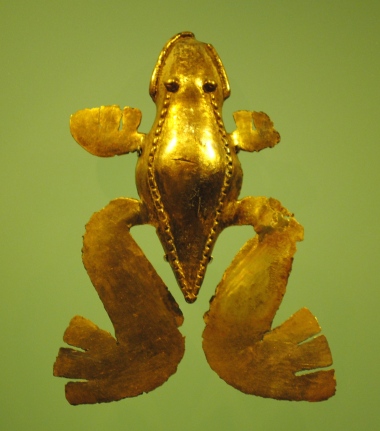 Golden bird
We chose to go to one more museum before heading home, Museo Nacional de Colombia. One room housed Gabriel García Márquez’s iconic white guayabera, next to a video clip of him accepting the Nobel Prize in Literature. Another domed room housed gigantic Botero paintings from all periods. We sat on benches and stared upwards, amazed that so many styles were created by one artist. And then, home. Past men playing chess, vendors selling watermelon, and beautiful brick buildings. 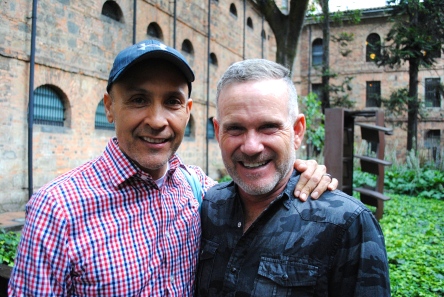 Cris and Tony in the courtyard at the museum 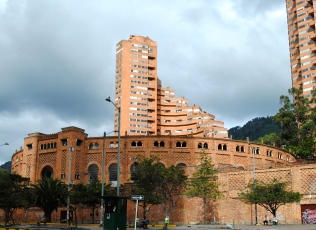 The guard laughed as he saw my eyebrows lift in surprise and my mouth form an “Ooooh!” when the thunder boomed. We had been discussing what to do next; the immediate patter of rain made our decision for us. We ducked into the museum just as the downpour began.

Only two floors and less than twenty rooms, the museum was manageable, not overwhelming as some museums are. We casually strolled from room to room, taking in the whimsical creations of Botero, his plump figurines interspersed between naturalezas muertas, still lifes. As we finished viewing each room of art, we walked along the pathway encircling the courtyard, occasionally sitting on a bench, watching the rain fall, and counting the time between lightning bolts and thunder claps.

Some rooms were full of statues – big statues, little statues, tall statues, short statues, but always fat statues. People reclining, Adam and Eve and apples, birds, hands – all so plump. They begged for touching; the guard had other ideas as we edged closer than necessary to the smooth stone. He made one exception – the giant hand at the entrance.

Resting in a big hand